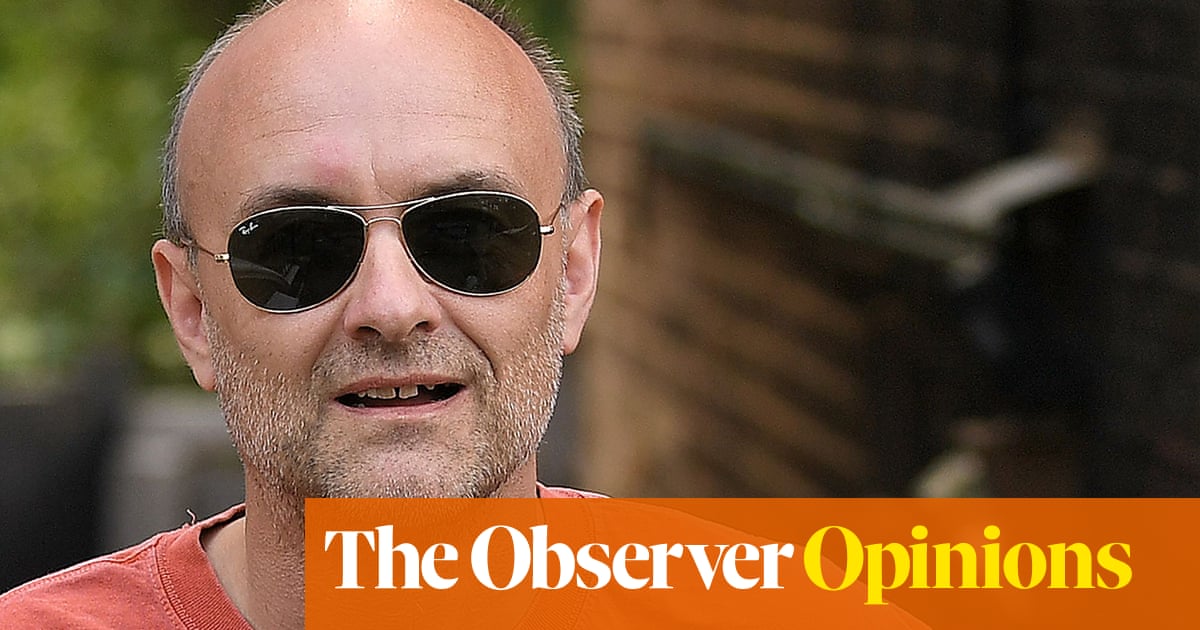 It is one of the most heartbreaking stories of this pandemic. On 31 March, Ismail Mohamed Abdulwahab, 13, from Brixton, south London, died in the early hours of the morning at King’s College Hospital after testing positive for coronavirus. According to a family friend, his mother and siblings could not be at his bedside and, after some of his siblings also developed symptoms, his immediate family had to miss his funeral as they were required to self-isolate. It is impossible to comprehend the scale of their pain.

On the same day that Ismail died, officers from Durham constabulary made contact with a member of Dominic Cummings’s family in Durham about reports that the prime minister’s most senior adviser had been seen by a witness on their property, despite being in London a few days previously. We now know from revelations in the Guardian that Cummings and his family travelled 260 miles to Durham after his partner developed coronavirus symptoms. Yesterday, Downing Street issued an official statement that Cummings and his family went there after his partner developed Covid-19 symptoms, in case he also fell ill and needed help with childcare, but that they maintained social distancing with his extended family. Sources close to him said on Friday night that he and his immediate family stayed in a separate building on his parents’ property. Downing Street also denied that police officers had contacted anyone in his family as stated by Durham constabulary, and said that his actions were in line with coronavirus guidelines.

This is not just Westminster tittle-tattle; it is far more serious than that. It goes to the heart of the credibility of the government’s pandemic response. Ministers have set out clear guidelines that it has asked all citizens to abide by in order to protect the NHS and limit the number of deaths. Those guidelines include instructions that anyone in a household where someone has symptoms of Covid-19 should not leave their house for 14 days.

Millions of people have complied with this guidance at huge personal cost. A boy died without his mother by his side; people have been unable to spend time with relatives who have terminal illnesses. There have been missed funerals; babies born who are yet to meet their grandparents; single parents with Covid-19 who have struggled to care for their children while sick; medical and care staff who have moved out of their homes to avoid putting their children at risk. These are sacrifices people have willingly made in order to protect healthcare workers and save lives.

Of course this lockdown has involved unbearably difficult decisions; of course parents have fretted what will happen to their children were they to become seriously ill. But many will have decided that they must comply with the government guidelines. How does it look when it turns out that a senior government adviser decided he was above the rules, and that the possibility he might need childcare help was worth the risk of two adults, infected with coronavirus, travelling hundreds of miles? It reeks of breathtaking arrogance and a callous disregard for the welfare of NHS and care staff.

In shielding Cummings, ministers reveal … they are willing to undermine a pandemic strategy to save a colleague’s job

Worse still has been the response of the cabinet. Instead of insisting that Cummings resign, in the same way they did with other, less prominent government advisers who broke guidelines, senior ministers have rallied to Cummings’s defence. Michael Gove tweeted that caring for your wife and child is not a crime, as though those who obeyed government guidelines despite the implications for their families somehow cared less about them. Rishi Sunak appeared to accuse those asking the question about Cummings’s conduct as being motivated by political point-scoring. The health secretary, Matt Hancock, defended Cummings’s actions as “entirely right”. At yesterday’s press conference, Grant Shapps and the deputy chief medical officer gave conflicting messages about under what circumstances it might be permissible for someone to leave home if they live in a household where one or more members have symptoms. In shielding Cummings, ministers are revealing an ugly truth: they are willing to undermine the government’s public health messaging and its entire pandemic strategy – to risk people’s lives – in order to save their colleague’s job. It is a disgrace.

The Observer gave the government the benefit of the doubt when this crisis broke: these are the most difficult governing circumstances a prime minister has faced for decades. But its response has been blighted by a catalogue of errors that it has declined to learn from: its failure to ensure there were adequate supplies of protective equipment in hospitals and care homes; the delay in introducing social distancing that its scientific advisers now think might have resulted in more deaths; the lags in building up testing capacity; the failure to get a grip on the crisis in our care homes.

Over the last week, worrying details have emerged about the flaws in the government’s track and trace strategy, which will be so critical in minimising outbreaks of the pandemic once social distancing is relaxed and schools are opened. It has outsourced the bulk of contact tracing; newly recruited call-centre staff have reported receiving barely any training for what is considered a skilled job in the countries that have most successfully deployed tracing strategies. And it has delayed involving local councils and their public health experts in its plans.

As fresh details emerge about Cummings’s trip to Durham, we can now add hypocrisy alongside incompetence to the charge sheet on this government’s handling of the pandemic. People who have missed out on seeing their loved ones one last time, who have struggled to care for their disabled child without their usual support, who have yet to meet the newest members of their family, will be angry. They are right to be. The country deserves better.

Why are so many athletics records falling?

A new film sheds light on the murder of Jamal Khashoggi