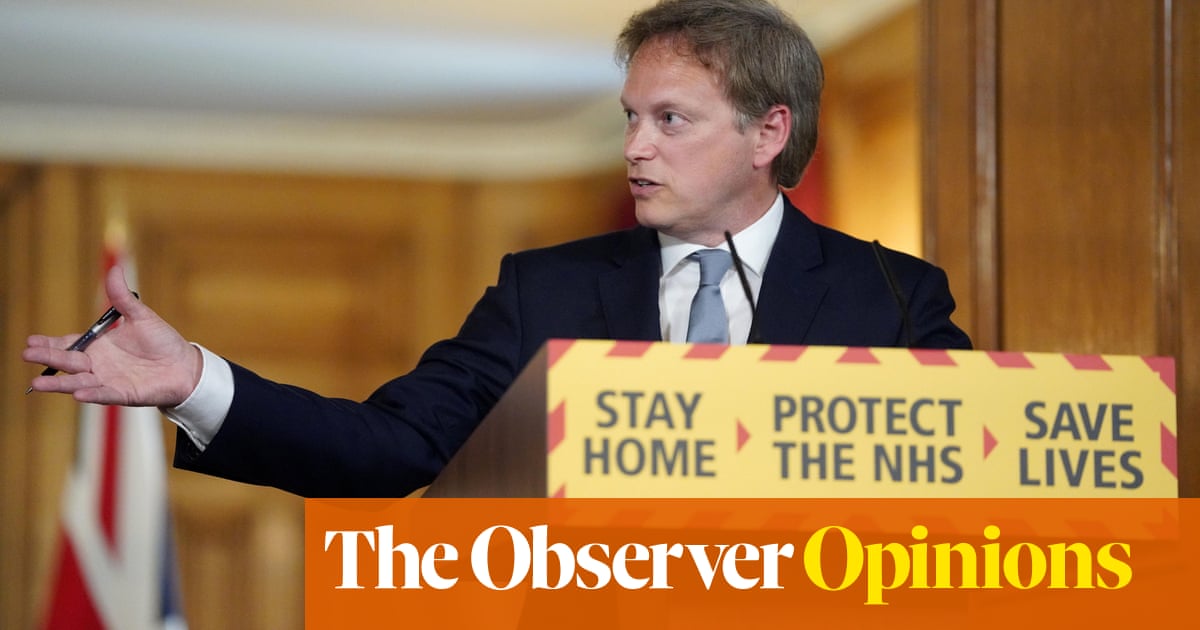 ‘In spite of the sunny bank holiday, it is vitally important that we continue to abide by the current restrictions: stay home, protect the NHS and save lives.” That was the message delivered by the environment secretary, George Eustice, at Friday afternoon’s press conference. Yet just the day before, most newspapers were emblazoned with excited headlines foretelling a significant relaxation of social distancing restrictions, based on briefing from government sources: “Lockdown freedom beckons”, “First steps to freedom from Monday” and “Stay home advice to be scrapped”.

Despite the critical importance of clear public messaging to any public health strategy, the government’s communications have been marred by mixed messages throughout this deadly pandemic. Its core message, asking the public to stay at home to protect the NHS and save lives, has been very effective, but this has consistently been undermined by ministers and advisers inaccurately briefing the press that there is about to be a shift in policy. Before the Easter weekend, reports appeared that ministers thought that the public had been too obedient in following the lockdown, and that a relaxation was imminent. The same happened before this bank holiday weekend, forcing the government to clarify that there was no change in restrictions and that people must continue to abide by the law.

The tone of these briefings has been shockingly out of step with reality. Last week, the UK’s official death toll overtook Italy’s to make us the worst-hit country in Europe at this point (the UK’s official statistics capture a smaller proportion of excess deaths than in many other European countries, suggesting that, if anything, the UK will look worse as the death toll becomes more accurate). Every day, hundreds of families lose their loved ones to this virus, healthcare workers put their lives at risk by going to work without adequate protection, and care homes struggle to manage the spread of the disease among residents. As a result of high levels of public compliance with the lockdown, infection rates have fallen, but not to a point where there can be any significant relaxation of social distancing: the measures that will be announced later today will rightly be very incremental.

It beggars belief that government sources have, regardless, been briefing that the end of lockdown is nigh, and floating, then stepping back from, major policy changes – such as the potential for households to mix in closed groups of up to 10 people. It is a recipe for sowing confusion and seeding a laidback approach to social distancing. New policy should be announced only to parliament or at the daily press conference. We can only hope that the public continues to listen to and comply with social distancing, despite the government’s unclear messages.

These shambolic communications are a sign of a worrying lack of competence at the heart of government. Bombastic war metaphors are being used as a substitute for long-term strategy. The government’s success in rapidly expanding NHS critical care capacity has not been matched in other areas, from ensuring adequate supplies of protective equipment for frontline workers, to delays in expanding testing capacity, to the disaster that is unfolding in many care homes.

The government has consistently faced calls from the opposition and scientific experts to be more transparent about how it intends to relax social distancing restrictions without triggering a second wave of deaths later in the year. Any significant relaxation of the lockdown is contingent not just on getting infection rates lower but on having adequate testing and tracing capacity to quickly identify and isolate new outbreaks.

Yet the government has failed to publish a proper strategy. It has adopted arbitrary testing targets: first a quarter of a million tests a day, then 100,000, and now 200,000, without explaining how these targets fit into a strategy for managing future outbreaks. It manipulated testing figures – sending out a large number of tests post on one particular day, and counting these as completed tests – in order to meet its arbitrary 100,000 target, which it has since fallen back from. It would make more sense to adopt a dynamic target that aims to keep the proportion of tests that come back positive below a fixed figure: this would help ensure that we are testing in sufficient numbers given the incidence of the virus. We do not know what assumptions the government is relying upon; for example, how quickly test results will need to be turned around to feed into an effective track and trace system.

In terms of tracing, experience from countries such as Singapore suggests that technology and contact tracing apps can only assist, not replace, teams of human contact tracers. Yet there are worrying signs the UK may be relying too heavily on the development of an app, with all the privacy concerns that this involves, and not enough on building skilled teams of contact tracers. While it has committed to recruiting 18,000 contact tracers by the middle of this month, this may not be enough, and it emerged last week that the government is in talks with large private-sector contractors to provide 15,000 call-centre staff, who would have only a day’s training. One company is Serco, which was last year fined £23m by the Serious Fraud Office over its delivery of electronic tagging contracts. Meanwhile, it is unclear if and how the government intends to deploy the thousands of environmental health officers who work for local councils; it has been far too slow to involve local government public health experts in other areas, for example testing in care homes.

This is the most difficult governing challenge the country has faced in decades; the gaps in our knowledge about this virus means that there is often uncertainty as to the best way forward. It would be unreasonable to expect a government to make no missteps. Yet the evidence is mounting that this government’s rank incompetence has contributed to the terrible numbers of deaths of recent weeks. This cannot wait for a post-hoc public inquiry: ministers have to face up to and learn from their mistakes in the here and now. People’s lives depend on it.

[Health] Over-40s next in line to get a Covid vaccine

[Stories] ‘We couldn’t afford IVF so we risked finding a sperm...

[Uk] Queen urges people to ‘think about others’ by taking Covid...