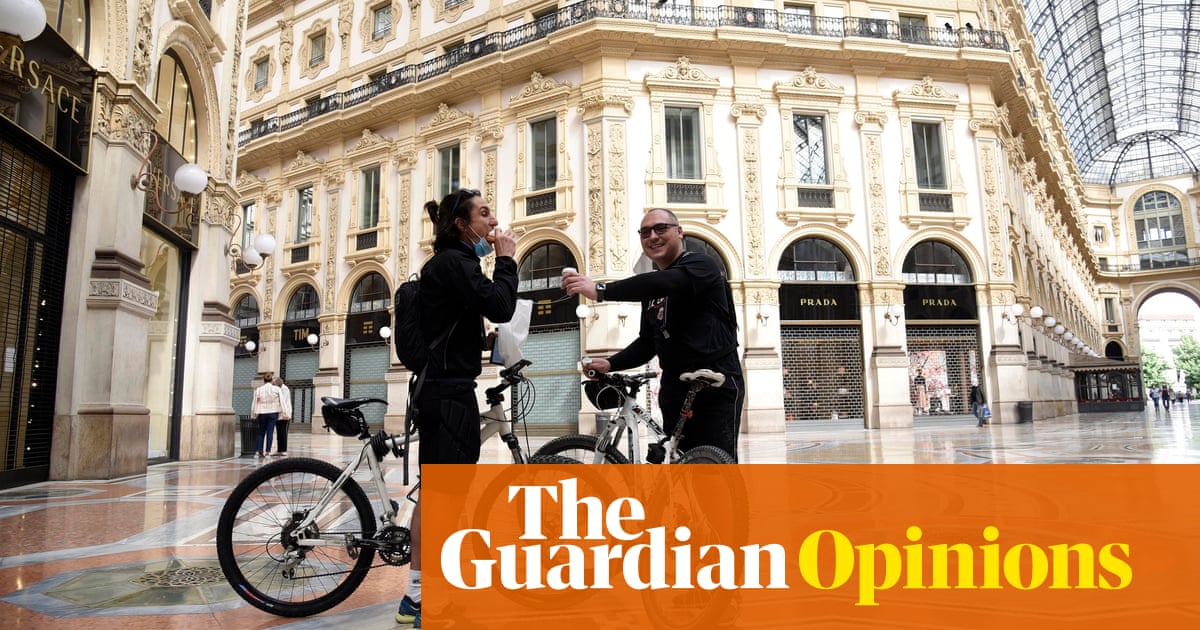 “We are living in the night of the virus,” wrote one academic, soon after Europe’s first Covid-19 lockdown was imposed in Italy. “Living in the dark, because it’s difficult to see what’s happening out there, since we are shut up in our homes.”

On Monday Italians entered blinking into the light again, after nine weeks of more or less total confinement, enforced by a combination of fines and moral exhortation. As the prime minister, Giuseppe Conte, begins tentatively to reopen the economy, the employees of Ferrari and Lamborghini are returning to their factories, along with other workers in the manufacturing and construction industries. Shops will open in two weeks’ time; bars and hairdressers in June. Italians are able to exercise freely at last, stroll through late spring sunshine and visit relatives.

Given Italy’s role as a pioneer in the grim endurance test of lockdown, this moment of release feels like a minor landmark. As the northern region of Lombardy became the early European centre of the coronavirus pandemic, its suffering opened a continent’s eyes to the peril that it faced. Images of overwhelmed intensive care units and reports of dying health workers galvanised politicians across Europe. Restrictions were placed on populations that would have been flinched at in late February. On Sunday, Italy reported a daily death toll of 174, the lowest figure since 10 March, confirming that the worst is over for now.

That downward trend justifies Mr Conte’s relaxation of restrictions. But it may be that, as Europe enters the post-lockdown phase of the coronavirus crisis, Italy will have more cautionary tales to offer. The gradualism of Mr Conte’s post-lockdown approach has prompted anger and anxiety as well as relief. One poll found that 62% of Italians think they will need psychological support in the coming period, as the government attempts to navigate a public health crisis and an economic meltdown at the same time.

The scale of the prime minister’s task is gargantuan. In the first quarter of the year, Italy’s economy shrank by close to 5% – the steepest contraction ever recorded by the Office for National Statistics. Tourism, a vital source of revenue, is down by 95%. With the aviation industry on its knees, there is no likelihood of a significant upturn any time soon. The mood in the hospitality sector, at the back of the queue as the country tentatively opens up, is fearful and mutinous. In Florence and other cities, angry bar owners, restaurateurs and other small business owners handed store keys over to local mayors, after learning that they would not be part of the first post-lockdown wave.

Opposition MPs, led by the leader of the League, Matteo Salvini, staged an occupation of parliament on 1 May, calling for a quicker exit from lockdown restrictions. Some members of Mr Conte’s own coalition agree that the pace must be upped. Last week the ratings agency Fitch downgraded Italian bonds to one level above junk status, making the huge and rising national debt less sustainable to maintain. Meanwhile, northern European states have been conspicuously reluctant to share the burden by issuing mutualised debt in the form of so-called coronabonds.

In a multifaceted crisis that is only reaching the end of its beginning, there will be no neat endings or satisfying story arcs. Back in March, there was admiration for the colourful displays of collective Italian defiance under lockdown. From the display of rainbow banners bearing the legend “everything is going to be fine” to balcony singing, people found ways to express hope and solidarity. Italians are back in the streets. But in a context of psychological fragility and extreme economic distress, Mr Conte must now find a way to take the measures required to salvage businesses and livelihoods, while protecting his country from a second wave of infections and deaths. It is a dilemma that the British government will soon share.