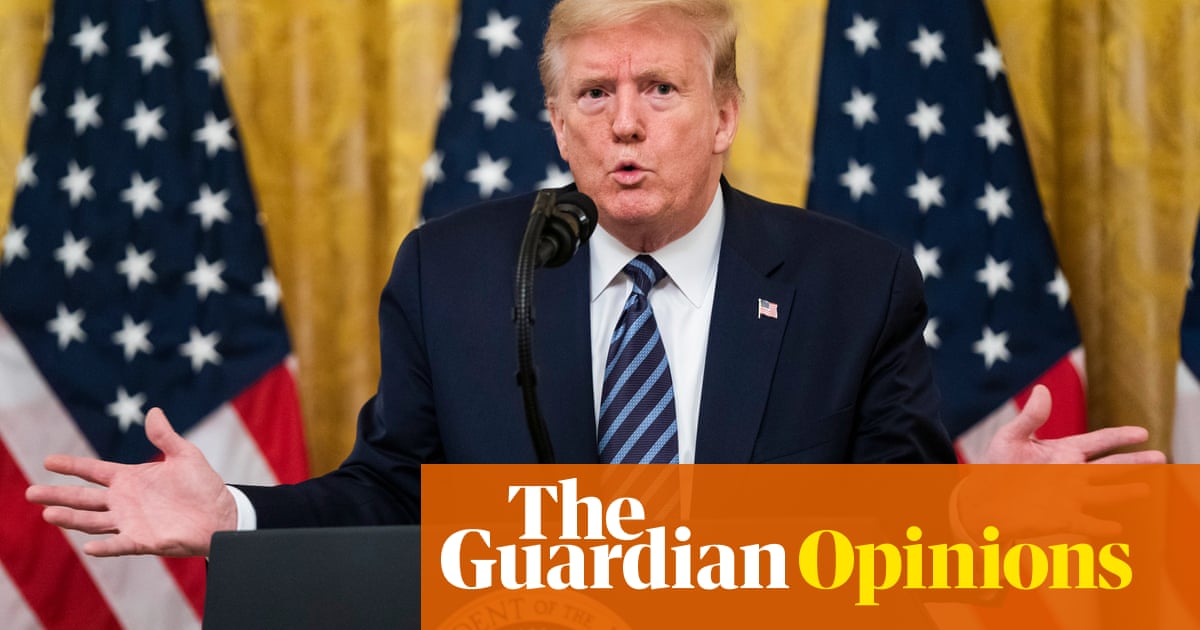 The words were eerily similar to the president’s prediction in late February that “It’s going to disappear” – a theme he harped on repeatedly as the caseload and fatalities rose. Since that forecast, a million Americans have fallen ill with coronavirus – almost a third of the global total – and more than 60,000 have died, in just a few weeks surpassing the US death toll in all the years of the Vietnam war. This week, it was reported that almost 70 people had died at a single veterans’ nursing home in Massachusetts. New York is struggling to bury its dead.

This is what the president’s son-in-law, Jared Kushner, describes as “a great success story”. This is the context in which the administration is letting its physical distancing guidelines lapse, instead advising much less stringent measures.

Mr Kushner suggests that by July the country could be “really rocking again”. But Americans will suffer from Mr Trump’s keenness to get back to business, as if the pre-coronavirus state of affairs were still possible. Medical experts have already warned about the risks of another surge in cases. The question is whether states, cities, institutions and individuals can again mitigate the harm he is wreaking upon his country. Some may; others are leading his charge: in Georgia, such essential services as tattoo parlours and bowling alleys are once again plying their trade. Texas is allowing shops, cinemas, shopping malls and restaurants to reopen, albeit with restrictions on capacity. Without significant testing and tracing, it is evident where such decisions will lead.

The best that can be said for Mr Trump’s election-driven wishful thinking is that it is less immediately dangerous than his recent public musings that people might have injections of disinfectant as a cure. Each week of the pandemic has brought new shame upon the president: he failed to equip his country and its health workers, to advocate physical distancing when it was desperately needed, or even to look like he was seriously concerned about the outbreak and its victims, preferring instead to boast about the ratings for his briefings.

While leaders around the world enjoyed a surge in support as the pandemic took hold – the rally-around-the-flag effect – Mr Trump’s appalling performance has finally taken a toll on his popularity. He had counted on a strong economy to see him back into office in November. But with more than 30 million US workers filing unemployment claims in the last six weeks – and economists suggesting that the real level of job losses could be far worse – his confidence has been shaken.

This week it was reported that he had lashed out at his own campaign after polls showed him trailing Joe Biden in crucial states and with older voters. With the Democrat facing a sexual assault claim and running a virtual campaign while Mr Trump commands daily airtime, it is clear that the president is doing the damage himself. He is seeking to shift the blame for the pandemic to the World Health Organization (having ignored its repeated warnings) and to China. On Thursday he contradicted his own director of national intelligence by claiming that he had seen evidence that the virus originated in a Wuhan laboratory; Trump officials have reportedly leaned on the agencies to find evidence to back the theory.

This conduct too is unpleasantly familiar. His contempt for the truth; his determination to evade responsibility while holding the most powerful job in the world; his ignorance, his narcissism and the threat he poses to his country – all have become still more painfully evident through this crisis, but were clear before. Yet he has so far defied the laws of political gravity. Americans have paid dearly for Mr Trump’s complacency, recklessness, irrationality and incompetence. But are they at last ready to make him pay?

Trials and tribulations—how do vaccine trials work and what do their results mean?

An animal that can regrow its entire body

“The feeling that most Brazilians have is that there’s nothing that anyone can do”—a...

Trials and tribulations—how do vaccine trials work and what do their...

An animal that can regrow its entire body